Market Shows Signs of Improvement Ahead of Further Rate Increases

The GTA housing market showed some improvement during August as sales and prices increased from July. The 15% monthly gain in sales was unusual for August, which is typically the slowest period of the summer for home buying. Nonetheless, sales were down 34% from a year ago and represented a 20-year low for August. Over the past 12 months, total sales volume of 91,412 transactions fell back to its late-2020 level and below the 10- year trend level of approximately 100,000.

Notably, sales improved during August as new listings declined, which led to firmer market conditions. New listings fell 13% from July and declined 1% from a year ago to its lowest August level since 2010. As a result, the ratio of sales-to-new listings increased to 53% — the third consecutive monthly improvement and returning to a balanced range (45-60%). Furthermore, active listings decreased to a five-month low and were 12% below their 10- year average. The 2.4 months of supply on the market at the end of August was down from the 27-month high of 3.1 months in July and only slightly above the 10-year average of 2.0 months.

While homes continued to take longer to sell in August at an average of 22 days (19 days in July) and were negotiated for an increasingly lower amount than asking prices at 97.7% (98.5% in July), average prices increased slightly by 0.5% from July. This occurred as buyers became more active at higher price points in advance of further interest rate increases. At an average of $1,079,501, GTA resale prices were up 0.9% from a year ago but down 19% from the market high reached in February ($1,334,148).

Despite the latest adjustment, average prices were still 36% higher than the pre-pandemic level in August 2019 ($792,135), with three-year average annual growth of 11.2% remaining above the 20-year average rate of increase of 7.4%.

See the charts below for more information: 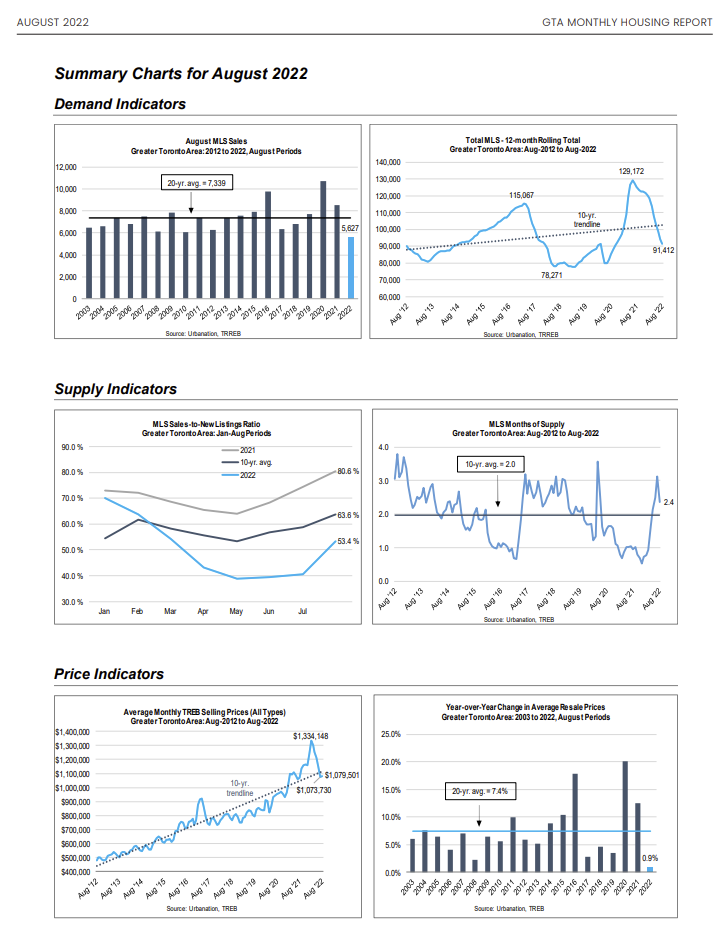 Compared to July, sales saw the biggest improvement during August for detached homes, which experienced an 18% month-over-month increase in activity, compared to gains of 14% for semis/rows/towns and 11% for condo apartments. On a year-over-year basis, sales were down the most for condo apartments with a 41% decline. While all housing types saw lower months of supply in August, the largest drop was recorded for detached homes (falling from 3.2 to 2.3 months). Condo apartments maintained the highest levels of supply at 3.0 months (down from 3.7 months in July), as first-time buyers have been most affected by rate increases.

Detached homes were the only property type to see prices stabilize during August, increasing 1.3% month-over-month to an average of $1.38 million. This occurred even as detached homes sold for 96.8% of asking prices in August (compared to 98.1% in July). However, on an annual basis, detached homes were the only property type to record a decline in average price at 3.1%, compared to 0.9% annual growth for semis/rows/towns to $936K and 3.6% annual growth for condo apartment prices to $711K. Compared to three years ago (August 2019) in the pre-pandemic period, average prices were up 41% for detached homes, up 37% for semis/rows/towns, and up 24% for condo apartments. 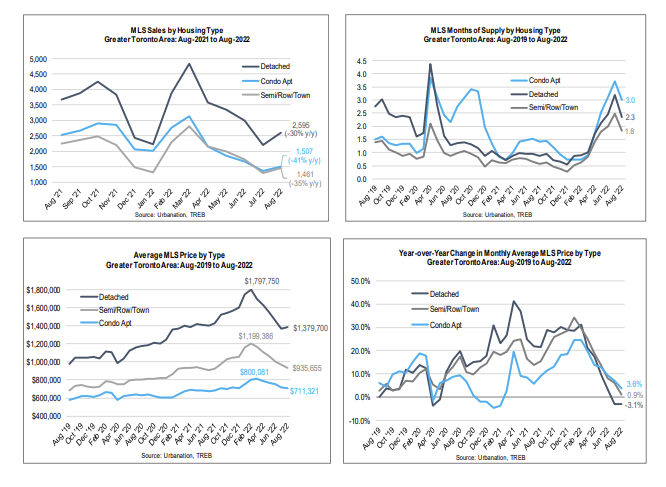 Between July and August, sales activity increased across all price ranges for detached homes, led by the $1.75-1.99 million bracket with 26% month-over-month growth and continued momentum in the bottom end of the market with 23% growth for detached homes under $900K. Monthly sales growth of at least 20% was also identified among detached homes selling from $1.0 to $1.249 million and from $1.25 to $1.49 million. In the condo apartment market, month-over-month sales growth was recorded across all price ranges except for $800-999K, with growth led by the $500-599K bracket (+21%). Across both markets, the higher end recorded double-digit sales growth between July and August of 14% for detached homes $2 millionplus) and 11% for condos $1 million-plus.

Low-Rise Supply Falling Fastest in the 905

Initially more focused in the 905 region of the GTA, price declines from the market peak are beginning to catch up in the City of Toronto. Median detached prices were off by 24% from February in the City of Toronto, similar to the 25% decline in the 905 where supply is now lower than in Toronto (2.2 versus 2.7 months). One clear exception was detached homes in Central Toronto, which experienced the smallest Feb-Aug median price decline of 17% and recorded 11% year-over-year price growth (to $2.08 million). Overall, prices have held up best for Central Toronto condo apartments, which were down 9% since February.

As the market digested the surprise 100-basis point increase to interest rates in July, sales began to improve in August while still remaining exceptionally low. Some buyers waiting on the sidelines took advantage of price discounts, which was all that was needed to provide some stability for prices amid low levels of listings. The adjustment in prices so far has largely offset the increase in mortgage carrying costs caused by higher rates, helping to create an equilibrium price level in August that still remains substantially higher than before the pandemic.

However, there remains a large segment of buyers that have either become priced out due to high stress test rates (reaching about 6.5% in August and over 7% in September) or continue to wait for further price declines as interest rates rise further. Weakening expectations for the market have been fuelled by widespread media coverage of various economists predicting price declines lasting into 2023. It will be very telling how sales react in September to the latest 75-basis point increase in interest rates. Should demand rise alongside an expected seasonal increase in listings, prices may continue to hold relatively steady. However, in likelihood, the latest hit to affordability from the large 75-basis point rate increase will require at least some further downward price adjustment in the near-term.

Importantly, sellers don’t appear to be very motivated to accept steep discounts in most cases, and the “distressed sales” occurring during the early part of the downturn have faded. As buyers adjust again to the latest rate increase, and also begin to see signs that rates may stop rising in the near future as inflation subsides, there should be a more sustained increase in housing market momentum. This may not be too far off, as slowing economic growth and declining commodity prices are leading to market expectations that the Bank of Canada’s “terminal rate”, judged by economists to be around 4%, will require only a few more smaller rate increases from the current 3.25% level, which is now above the neutral rate of 2-3%. So long as supply remains restrictive and higher rates don’t lead to mass forced-selling, an unlikely scenario as owners tend to do everything they can to keep their homes in challenging financial times, prices should soon stabilize and bring forth renewed confidence in the market.